A Reflection on the Museum of Broken Relationships 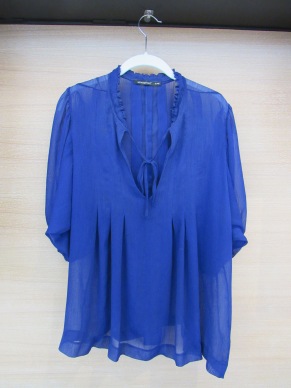 When we part ways with someone, we’re left with more than a broken heart.

We’re left with objects – his oversized t-shirt we sleep in, her bobby pins we later find in the shower, ticket stubs from movies and athletic events, and photo booth strips from happier times – that most either retire to a box high in the closet or toss in the trash. These ordinary objects become relics of our romantic past.

Whether they’re seeking for the closure they never got, hoping to simply free up space, or wishing to have the final word, the donors of Hollywood’s Museum of Broken Relationships are ordinary people like you and me.

People who have had their hearts broken.

People who have fallen out of love.

People who have been cheated on, lied to, underappreciated, and even abused.

People who have been dumped in restaurants, over the phone, and after 35 years of marriage.

A year ago, you couldn’t have paid me to visit this little museum on the tourist-crowded Hollywood Boulevard. Just as you have to be in the mood to watch a depressing movie, I figured by the name alone this museum would induce tears. Yet the exhibits were not as deeply upsetting as I thought they might be. Sure, some are very sad, but others are amusing and even hopeful. I don’t think the point of this museum is to make us fear relationships, but to remind us that people change, grow, and recover over time. To loose love may feel isolating, but the experience of loss is universal. No one is alone.

Inside the modern, minimalist museum, you’ll find the blue chiffon top a woman was wearing the day her husband asked for a divorce; the bottle of wine two lovers shared when they left their spouses for each other; the spare key a woman gave back before never speaking to her ex again; a pair of silicon breast implants a woman’s ex convinced her to get; a brush with matted dog fur from the rescue pet they shared but later had to give up; a woman’s wedding dress crammed into a pickle jar; the bottles of cologne kept after a loving wife lost her husband to cancer; a street sign a boy stole with his high school girlfriend’s name on it; various engagement rings and love letters. There’s even the orange caftan donated by actress/actor couple Jenny Mollen and Jason Biggs that you may have seen on Chelsea Handler’s show.

A seemingly-cathartic process, anyone is welcome to donate an item no matter how ordinary or bizarre. All donations require a name for your permission, but will be displayed anonymously along with your own words.

Below you will find some of the stories and items that caught my attention, but this is by no means the entire museum collection. If you get a chance to visit the museum, I highly recommend you take the time to read the long story about a green coffee cup; it was too long to photograph but really struck a chord. 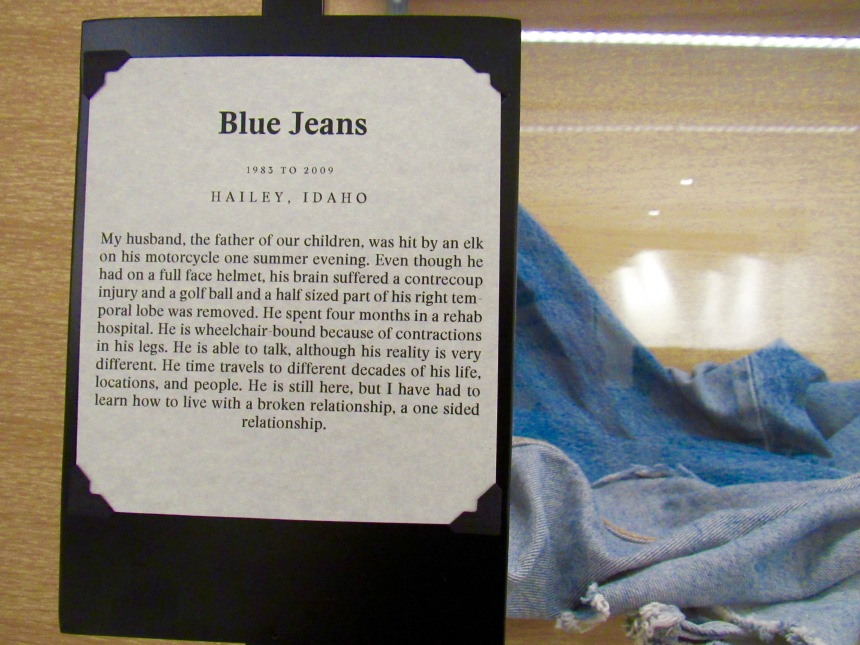 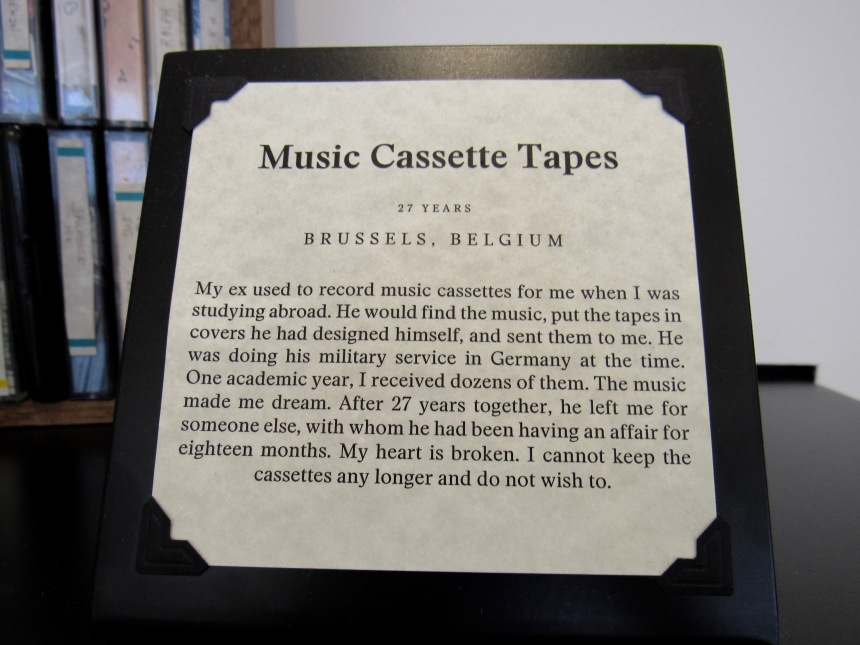 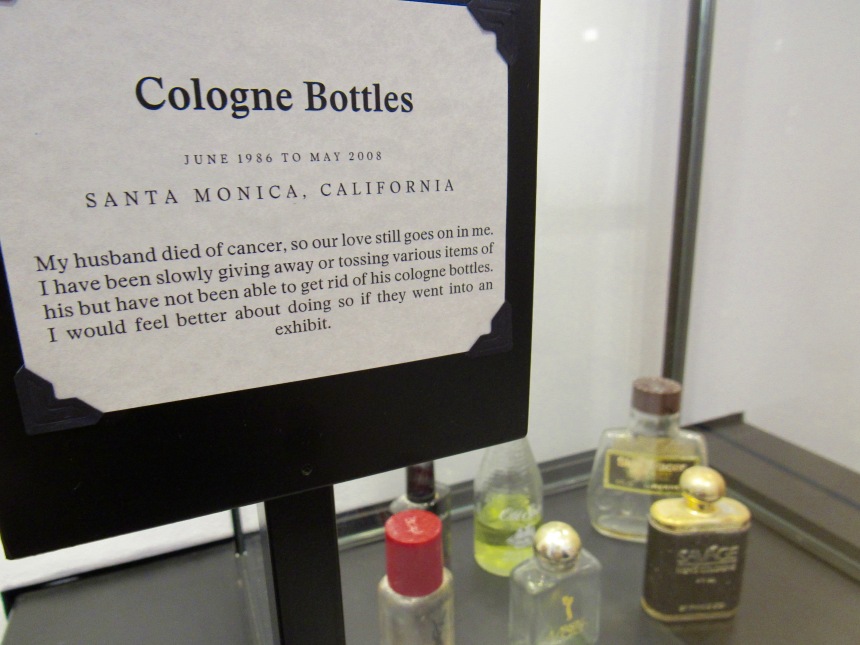 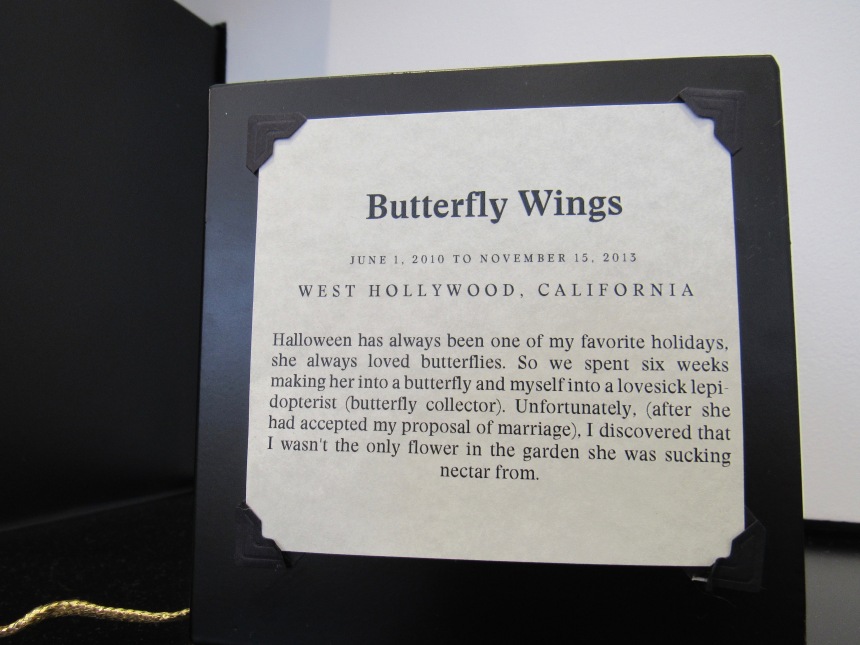 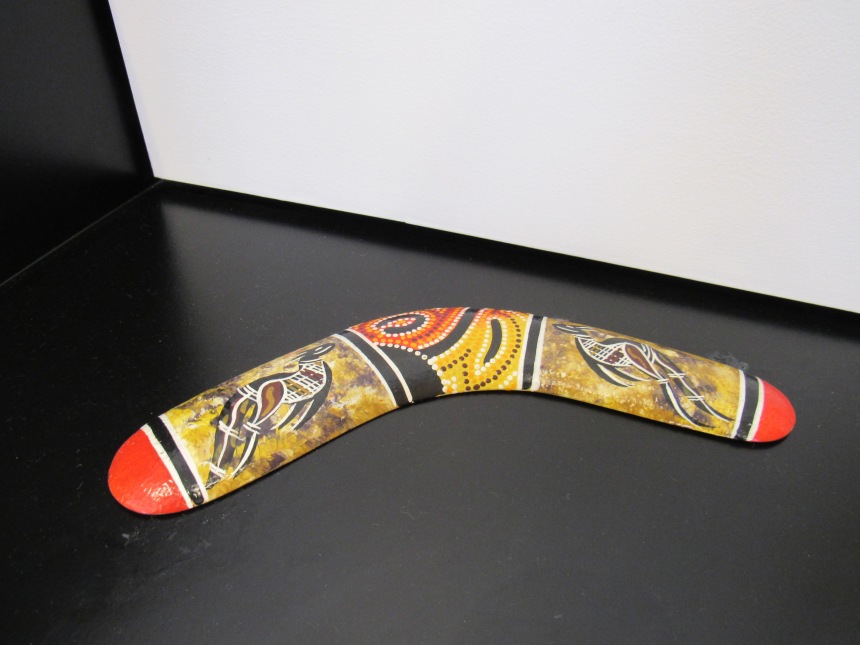 Visiting the museum will probably lead you to reminisce over your past relationships, so do so. But do so over a nice glass of wine!

4 replies to Heartbreak On Display