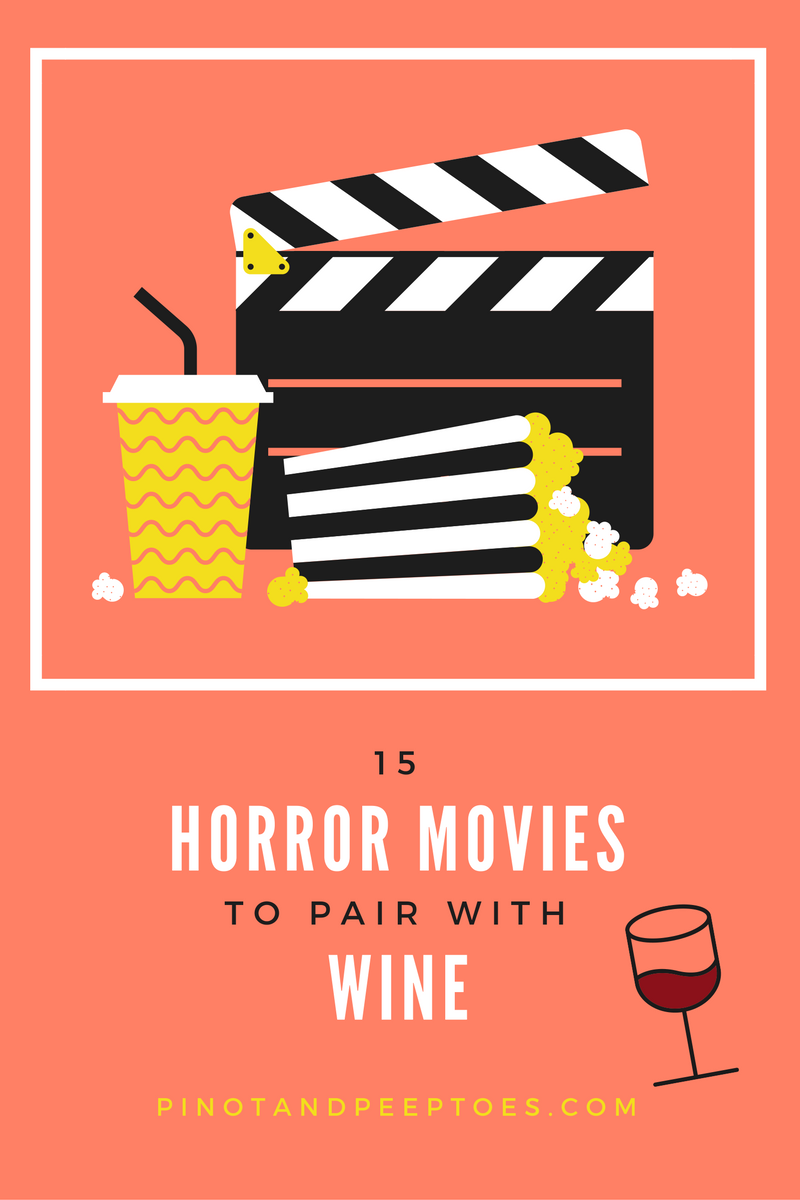 I’m always down to watch a horror movie, Halloween season or not. I seriously love getting scared! I was that kid at sleepovers who made everyone play hide-and-seek in the dark and always brought my dad on overnight school field trips because I knew he’d have the best scary stories to tell.

I’ve watched a lot of horror movies movies from the campy to the straight-up disturbing. I’ve also had my fair share of wine. I’ve decided to pair the two together because, why not? Just make sure to keep a good grip on your glass of red wine during those jumpy parts to avoid spills!

You may be confused as to why I’m pairing a white wine with this bloody slasher, but hear me out. John Carpenter’s 1978 Halloween is a horror movie marathon staple, just as pinot grigio is the basic, white t-shirt of wines. In California, the names pinot grigio and pinot gris are used interchangeably, and tend to be easy-drinking white wines. Just as a white t-shirt shouldn’t cost a fortune, you shouldn’t have to pay too much for a good pinot gris. The 2014 King Estate Acrobat Oregon Pinot Gris ($13) and J Vineyards Pinot Gris ($18) are two great options.

Imagine this: you’re deaf, living alone in a secluded cottage in the woods, and one evening you become the victim in a masked man’s game of cat-and-mouse. This ingenious plot delivers scares through suspense and silence. Viognier, one of the finest but rarest French white grapes, has been described as “a female gymnast – beautiful and perfectly shaped, with muscle but superb agility and elegance.” The film’s main character Maddie may lack the ability to hear, but the murderer greatly underestimates her other strengths that she uses to outwit him. For a California viognier, the 2013 Calera Viognier ($17.99), and for France, the 2010 Domaine Triennes Saint Fleur ($15).

In my opinion, Alfred Hitchcock’s Psycho (1960) is as classic as it gets. The shower scene still makes me paranoid in my own shower! I’d pair this one with a cabernet sauvignon. It’s the grape that put California on the international map as one of the world’s top wine regions, sort of like how Psycho is one of Hitchcock’s most-known films.

Loosely based on true events, Wolf Creek is an Australian horror film about three backpackers who find themselves taken captive and eventually hunted down by a serial killer in the outback after a brief escape. The beginning starts off a little slow but quickly turns into an unsettling thriller. Shiraz (another same for syrah) is fitting for this film because it’s the grape that helped put Australia on the wine map. It also boasts a seductive aroma and flavors like dark plum, boysenberry, blueberry, and mocha with hints of spice and violet. Yalumba makes some great value shiraz, as does Charles Melton. Warning: this film contains torture and may not suit everyone’s taste.

This was one of the first scary movies I watched as a kid and I don’t know about you, but it frightened me enough to avoid the deep end of my pool. Watching it now, I still get the same chills; although I’m much more aware that the shark is fake. Nothing pairs better with a film about a summer town whose beaches become the feeding ground for a great white than rosé. You can find some of my favorites here.

For this psychological thriller about a family who adopts a mysterious young girl after the death of their unborn child, I’d go with with a malvasia bianca like the one mentioned in this post. Its bouquet is deceivingly sweet (like Esther) and its flavors remind me of a more sophisticated moscato.

This film delivers good scares as a group of women go spelunking into a undiscovered cave in the Appalachian Mountains. I’m not particularly claustrophic, but I definitely found myself panicking as the women struggle to escape through the tight spaces of the cave. Petite Sirah is the perfect pairing for this film because it is dark in color and boasts earthy flavors, both cave-like aspects.

What Ever Happened to Baby Jane? + Nebbiolo

People don’t always regard this as a horror movie, but it’s always given me the creeps. This psychological thriller revolves around a bitter former child star actress who holds her crippled sister captive in an old Hollywood mansion. In real life, there was an intense, bitter Hollywood rivalry between the film’s two stars, Davis and Crawford, and obviously it benefited their performances. The nebbiolo grape has both the bitterness and charm that Jane does in the film. It’s a red varietal that is to Italy what cabernet sauvignon is to France. It’s a wine with very specific flavors and aromas that are reminiscent of tar, violets, and often an espresso-like bitterness that derives from the pronounced tannin.

The Cabin in the Woods + A red blend

This movie is difficult to sum up because it’s chocked full of surprises, scares, and even some laughs! Essentially, the story follows a group of college students who spend a weekend at a remote forest cabin and become victims to backwoods zombies; however, their fates are manipulated by scientists in an underground facility. It pays homage to slasher films, while also critiquing the torture porn genre and other horror film clichés. A red blend suits this film best because it blends the best grapes, or genre aspects in the film’s case, for complexity and boldness. You can find my most recent red blend review in this post. Warning: this film contains a lot of gore and may not suit everyone’s taste. 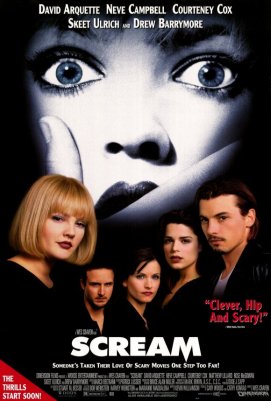 This 1996 Wes Craven cult classic slasher revolves around high schooler Sidney Prescott, who becomes the target of the mysterious killer known as Ghostface. There is irony amidst the scares, making this a clever horror film that most young audiences enjoy. I’d pair Scream with a glass of merlot; it’s a smooth red wine that often has a plummy taste with notes of dark chocolate. Just as the film delivers good scares without being over-the-top disturbing, the lower tannins in merlot make it an easy-drinking crowd pleaser. With merlot, you can go expensive and get a bottle of Duckhorn, or opt for a more wallet-friend version like the Kendall-Jackson Vitner’s Reserve ($18) or The Velvet Devil ($10).

A geology expedition in the Amazon uncovers fossilized evidence (a skeletal hand with webbed fingers) that link land and sea animals, and prompts further exploration for a team of scientists. The Creature or “Gillman” is considered one of the Universal Monsters, the film first premiering in 1954, and the studio has been discussing a modern-day remake. Sauvignon Blanc is a perfect pairing for the film because the tropical and citrusy flavors will make you feel like you’re on the Amazon River, too, and is considered a wild grape like the Creature. I always have a bottle of Kim Crawford’s Sauvignon Blanc in my fridge.

This 1974 Tobe Hooper horror film follows a group of friends, two of which are brother and sister, who fall victim to a family of cannibals while on their way to visit their late-grandfather’s home. It was originally marketed as a true story to attract a wider audience; however, the plot is fictional while the character of Leatherface and minor plot details are inspired by the crimes of real-life murderer Ed Gein. Syrah, often regarded as the “manliest wine,” is the perfect wine to pair with this film. French syrahs boast an undeniable potency in aromas and flavors – think leather, smoke, roasted meats, game, spices…I think Leatherface would approve. Warning: this film is on the more gruesome side and may not suit everyone’s taste.

Riesling often has a minerality to it – think the taste of wet stones, or perhaps the inside of Samara’s well – yet has a tinge of sweetness that comes through in flavors like stone fruit and citrus. In The Ring, there is a sweet and innocent side to young Samara despite her embodiment as the long-haired ghost that crawls out from TVs to kill those who have played a mysterious videotape. You can find my most recent riesling review in this post.

There have been a dozen Draculas over the years, but the 1931 film starring Bela Lugosi is the ultimate Count for me. He was my favorite Universal monster growing up and I would walk this film on repeat, memorizing all of his lines. Just as the story of Dracula is an old one, carignan is an ancient grape that makes a seductive red wine. You can find my most recent carignan review in this post.

Leave it up to Stephen King to perpetuate my phobia of clowns (and storm drains)! In this 1990 supernatural horror miniseries, sadistic Pennywise the Dancing Clown has the ability to morph into his prey’s worst fear. The series takes place over a span over time, showing when a group of kids first discover Pennywise, and then later when they’re called back as adults to defeat him. Pennywise has the ability of lure children (I will never understand how – he’s creepy even before his teeth morph!) to their deaths, so I think an irresistible muscat would pair nicely. Intensely aromatic and deliciously sweet, muscat comes in every form imaginable (like shape-shifting Pennywise): dry, sweet, still, sparkling, and fortified.

And the most recent horror/thriller I saw and enjoyed: Don’t Breathe